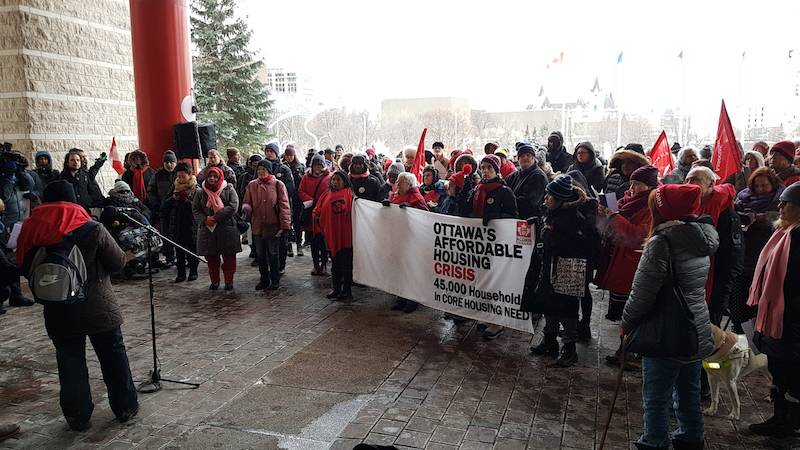 A coalition of Ottawa community organizations gathered in the February cold this year for a rally outside City Hall, designed to pressure the municipal government to take action on the housing crisis. Their demand: $12 million in the 2019 City Budget for affordable housing near rapid transit. Before the morning was through the crowd of around 100 people was celebrating: The city had gone beyond the activists' demands, proposing $15-million to build 250 new units this year, many of which would be built near transit. Mayor Jim Watson claimed it was "the largest one-year investment in affordable housing in the City’s history."

This was a smashing success for the housing coalition, a group of 64 organizations including the Alliance to End Homelessness Ottawa, Centretown Citizens Ottawa Corporation, City for All Women Initiative, Coalition of Community Health and Resource Centres of Ottawa, Healthy Transportation Coalition, and Ottawa ACORN.

It was also a moment of pride for us at the Institute for Change Leaders: we worked with the Healthy Transport Coalition in November 2018 to train their activists on the fundamentals of community organizing.The came to us with a set of mid-term objectives for recruiting an advisory committee, developing new leadership, and formulating a set of effective tactics. Over two days we worked with them to hone their story, teach recruiting and canvassing skills, and map out a strong theory of change.

This work paid off.

We were thrilled to hear from Trevor Haché, member-at-large at the Healthy Transportation Coalition, after their big victory:

I'm not sure if you heard... we recently won $15 million in the City of Ottawa's 2019 Budget to build new affordable housing, and in early April staff will bring a report to Council with their recommendations about government-owned land near 5 rapid transit stations that would be best suited for affordable housing. This important victory was thanks, in part, to the great Institute for Change Leaders trainings we have previously taken part in. We still have a lot more work to do, but with the excellent training provided by the Institute, we feel confident that we can continue to motivate elected officials to create housing, transit, and a city for all.

We love sharing stories like these, because the truth is those fighting for change at the grassroots are almost always underdogs, and setbacks and failure are an inevitable part of taking on powerful opponents. But the power of collective action is real, insistent, and constantly renewable. We'll say it again and again because it's true: when we organize, we win.

ICL has trained over 4,000 organizers to give them the skills they need to build power and win real change. We rely on donations to help provide the training at low or no cost to those who need it most. Please donate today to support our work.

Have a campaign or organizing project you're working on? Drop us a line, we'd love to work with you.

We Stand in Solidarity